Each trade moves projects forward, but when the plasterers arrive with their skill ( along with the mess) covering the walls, suddenly rooms begin to take shape. Our plasterers have also rendered round the exterior windows, doors and block work. Once completed and dry, we were itching to stabilize and then paint the render, to tidy up the exterior a little after looking so sad for so long. This won’t be fully completed until the side boiler/ mud room, porch and garage have been finished. 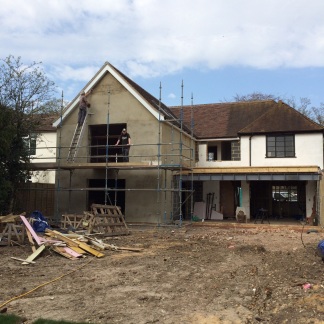 The new render on the extension being stabilised prior to painting

What a difference coats of paint make

Plastering in the day room

The new windows are in! 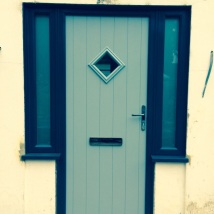 Despite my reservations, I’m pleased with the front door.

Once the plaster was dry the walls were ready to be painted with a ‘mist’ coat, this being a watered down trade white emulsion. Applying this base coat to new plastered walls will save on the finished emulsion paint coat required due to the porousness of bare plaster. It also shows up imperfections in the plaster which can be filled and sanded if necessary, leaving a smooth even surface for the final coats of your chosen colour. Also, if having metal light sockets and switches, the base mist coat will prevent moisture transgressing and causing discolouration  after the second fix electrics. The house suddenly became lighter and brighter. The ceilings had two coats of their final colour  but just one coat on the walls as the skirting boards have yet to be fixed in some rooms. I would wait for the comments from the different trades as they viewed my chosen colours’ being applied, which is mainly a neutral palette of soft greys. “What colour  do you call that”? They would ask. “Corpse Dick” I would reply. Taken aback I explained and showed them my niece’s comedy sketch about Farrow and Ball   http://www.farrow-ball.com/colours/paint/fcp-category/list and interior designers. https://sinteriors.wordpress.com/wp-admin/post.php?post=161087&action=edit

Other colours chosen to prevent the house from appearing too bland are similar to the popular choices from the 1930s’, which I found under the layers of wallpaper and can be bought from many paint companies.

Craig and Rose available at B and Q, Crown, Dulux, Little Greene Paint, Fired Earth, and of course Farrow and Ball, to name a few. One of which was called ‘Fresh Plaster,’ from Craig and Rose, which of course caused amusement and comments from the plasterers. I have used this colour in a north – facing room as it’s a warm colour. Remember, ceilings do not have to be white. In some cases this can cause the wall colour to look different than you intended. The ceiling can be painted the same colour as the walls, giving the appearance of a higher ceiling. This also makes the cutting in (where the walls meet the ceiling) a lot easier. If you have a hall or landing with a lot of doors, which don’t have any architectural appeal, by painting the same colour as the walls the appearance is less like a corridor because the doors blend into the walls. This is a popular current trend, but ensure that an eggshell, or paint specifically for woodwork finish is used and available in the same colour as the emulsion  Not all paint manufacturers produce all finishes in all colours’.

My biggest painting challenge was the Master Bedroom with its high vaulted ceiling. I had to climb a ladder onto a tower to enable me to reach the ceiling with the roller. I then had to climb down and ask someone strong to move the tower along a little, only to climb up again and paint the next area of ceiling. Progress was slow, over several days, but who needs a gym with all that exercise? Being such a large room I needed gallons of paint and good natural day light as the electrics had not yet been connected. Once completed and the paint dry, some of the walls appeared to be patchy and slightly different colours. This was due to different batches of paint of the same colour, despite my order for all the paint made at the same time. The only way to rectify this was to repaint the wall with a final coat of the same batch number paint. I must say I was very relieved to escape this room and move onto the next!

Our neighbour came round one afternoon, concerned about the fence boandary  and his hedge, wishing to see how we had dealt with it, since laying our new garden path alongside the boundary. The ancient, now rusted wire fence and remains of the wooden posts – hidden for decades behind over grown shrubs and trees was still there, where it had always been. He wanted to ensure that we knew where his boundary was, up to the remains of wire fence, and that the hedge was his. The wooden fence, such as it was and what remained of it was rotten and leaning inwards towards our garden due to his overgrown hedge and would need to be cut back before a new fence could be erected ( by us). This was pointed out to him, but he didn’t cut it back, he said ” as it didn’t effect him”. So we cut out the problem branches and returned the debris as it belonged to him, and our skip was already full.

In the main sitting room the new fireplace wall was divided into three equal sections. The centre section being left as bare plaster ready for the bricks which would be laid behind the multi- fuel stove. The two side sections were painted in. This was a compromise to the completed brick wall. Great discussions on the final design of the fireplace ensued. The finished height of the hearth ( so logs could be stored underneath) and the size of the multi fuel stove. Due to the volume of the room we only required a stove with a 5 kW out put, to avoid cooking ourselves. However, we wondered if the size of the stove would look too small in the room. Pencil mark measurements were made on the plaster and we painted a ‘stove’ in situ to visualise the space. The original quote we received from a company we had used before was very high, not due to the stove itself, but for the building of the hearth with a granite top and flue installation. They were not forthcoming or helpful when I explained I just wanted the stove and flue installed. Our builders are very caperble of building the hearth design with bricks, and making the hearth from cast concrete. This was the finished look I wanted to achieve. The hearth was constructed in a wooden frame and strengthened with steel wire. Coloured concrete was poured into the frame and left to set. Once dried and set it was removed from the frame and lifted into place by four men and secured. It looks amazing and was achieved at a fraction of the cost of granite. We sourced the multi fuel stove and flu from another company and installed by approved fitters. The long established installers thought the hearth was solid York Stone and couldn’t believe it was cast concrete.

During – Marking the wall for the multi-fuel stove

A raised hearth, brick back drop and multifuel stove in situ

The company who made our steel lintels also make a small selection of iron work railings,  and made to measure the Juliete balcony for the Master Bedroom. I was glad once they had installed this, so I could open the French doors and let some fresh air in and finish off the rear elevation.

Great to be able to open the French doors

Bespoke Railings for the Juliete balcony

I'm a qualified Interior Designer , who is passionate about our homes and interiors being a place of happiness, to reflect who we are, our lifestyles and a place to share with family and friends. My ethos is working to improve on what we have to do to achieve a feeling of contentment and well being in our homes. View all posts by Sarah